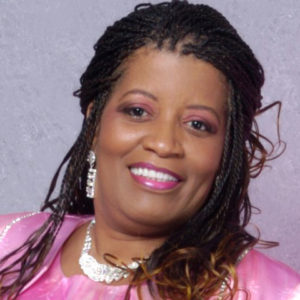 For more than 45 years, inspiration from the Lord and faith-filled music have been the heartbeat of Elder Rhonda Belt.  For the past 20 years, she has served as Evangel Cathedral’s Minister of Music and the Producer/Director of the Performing Arts Department. Elder Rhonda Belt was born into a heritage of God-ordained ministry leaders.  The daughter of Deacon William S. Berkeley, Sr. and the renowned musician, Mother Shirley M. K. Berkeley, she has been surrounded by a family of dynamic musicians, worship leaders, ministers and deacons.  It was inevitable that she would be called, appointed and anointed by God with a prophetic mantle to do great works for the Kingdom. Elder Rhonda has been a member of the D. C. Chapter of the Gospel Music Workshop of America since 1971.  As a recording artist, her achievements include a 2005 CD project, “Chosen to Change the Atmosphere”; recording engagements with Wintley Phipps, the Gospel Music Workshop, Henry McKenzie Davis & Co., Jeremiah Murphy & Judah, Bernard Mavritte & the Tabernacle Echoes, the late Donald Vails & Salvation Corporation and many others.  She has been a music teacher at the Joan Hillsman’s Music School and taught music theory at Webster’s Music Center, both in Washington, D. C. Her credits include Producer/Senior Director of Evangel Cathedral’s Broadway-style Easter and Christmas productions.  For more than ten years, Elder Rhonda continues to take the productions to new levels of visual excellence and passion. These productions have showcased gospel artists Donnie McClurkin, Beverly Crawford, Yolanda Adams, Vickie Yohe, Wess Morgan, BeBe and CeCe Winans, Vickie Winans, Tye Tribbett, Tamela Mann, Marvin Sapp and many others. Elder Rhonda is married to Master Sargent Dana. Elder Rhonda Belt is a provoking psalmist and demands excellence in the ministry!  One of her favorite scriptures is Philippians 3:13-14: Brethren, I count not myself to have apprehended: but this one thing I do, forgetting those things which are behind, and reaching forth unto those things which are before, I press toward the mark for the prize of the high calling of God in Christ Jesus.